M15: Playing to your Weaknesses – White

Hello and welcome to the M15 edition of Play to Your Weaknesses! The full spoiler is out and that means that we are less than a week away from the pre-release. I’m planning on attending a midnight one next Friday with some friends, then I’ll be doing two more pre-releases next Saturday and Sunday. M15 looks like it will have some great cards but this is the first time that I haven’t reserved a box for myself. Instead, I will be splitting a box with a friend and buying singles with the money I saved. I also plan on doing more booster drafts with this set to get the cards I want while not having to deal with too many bulk rares and commons at my house. As always, I’ll be starting my article with my choices for white. I’d like to start off with the pre-release promo that you’ll get if you choose white: Resolute Archangel

Flying cards are always good in limited, and this one has a neat trick to it. It’s 7 mana which means you’ll be casting it much later on in the game, but the great thing about the timing is that if you’re hanging on by a thread and about to lose, Resolute Archangel will take your life right back up to 20. Life gain tends to be pretty good in limited/sealed, so I think her ability will be pretty good. White isn’t a bad color to go with, but it’s probably not going to be as strong as the Theros block cards. 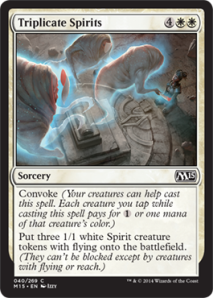 The first card I’d like to recommend for M15 limited is Triplicate Spirits. It is sporting the revisited ability Convoke from the original Ravnica block, and this isn’t a bad affect at all. Worst case scenario you’ll be paying 6 mana for three 1/1 flyers, but getting three bodies with one card is pretty darn good, even if you have to pay that much. However, due to Convoke, you’ll most likely be able to cast this for about 3-4 mana on turn 4 or 5 if you curved out well your first few turns. This is probably one of the best white commons. It’s pretty strong, so definitely play it in your sealed deck. In limited, I’d probably take it as one of my first 3 picks, especially if my bombs were pretty unexciting.

Seraph of the Masses

I like Seraph of the Masses pretty much for the same reason I like the previous card. Convoke makes the card easier play, and the more creatures you have the more valuable this card is. If you have 3 creatures on turn 4, you could easily get this out as a 4/4 flyer. The draw back is that as your  creatures die, she gets weaker. I’d play high toughness creatures along her, such as walls. The longer they stay alive, the quicker your opponent will die. Don’t play this in an aggro deck however. I don’t think she’ll be as powerful if your creatures are dying every turn. I wouldn’t take it first in draft, but I’d take it as one of my top 5 choices. I think it’s solid regardless of sealed deck you’re building, but just recognize her role and her drawbacks.

Another card that gives you good value in limited is Raise the Alarm. Usually, a 2 mana sorcery that gives you 2 creatures would be playable, but what makes Raise the Alarm great is the instant speed effect. This means you can use the soldiers as emergency blockers, or add them in at the end of the turn to hurt your opponent. This could be important if your opponent is counting damage and leaves back just enough blockers to stay alive. I think it’s around a 5th-7th pick in draft. You might see this come around the table a second time in draft, but you definitely won’t see it a 3rd time.

This isn’t an amazing card, but I think it has it’s uses. It helps you stem loss of life in close games and keeps putting creatures into the battlefield if you’re racing your opponent. The mana cost is a little high as well, which hurts it. However, it does have good synergy with convoke costs, so if you  are running a lot of those type of cards and need some creatures to tap, consider this card. I wouldn’t expect it to go early in draft, so you could probably pick up as your 10th card or so. It would be alright in a BW limited deck with cards like Sign in Blood and other loss of life cards, so it might be so bad if the cards you have align. 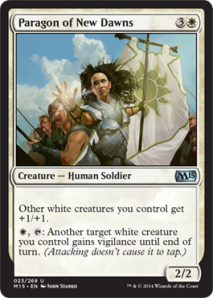 If you end up getting some of those token generators such as the ones I mentioned above, the new Paragons might not be so bad. Giving your army of tokens a +1/+1 bonus is good, and there are some other decent white creatures you could play along side it as well. You have to use your judgment though on whether or not to include her in your stack of 40 cards. If your deck is leaning towards white, she’ll be a pretty strong card, but if it’s just splashing a few white cards, there are probably better creatures you can have in the 4 slot. Not first pick material, but no absolute garbage either. I could see it going around a table one time, meaning it’s alright to choose her as a 9th+pick. Might not be a bad card in your sealed deck either as your 23rd card. 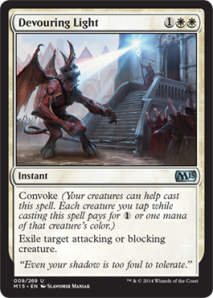 White removal that exiles permanently  at instant speed with convoke. Pretty awesome. It would probably be one of my first picks in draft. Good removal is hard to find in core sets, especially in white. You definitely won’t see this card making it back to you if you let it pass, so get it as soon as you see it if you decide on white.

Geist of the Moors

White and Blue have the best flyers in this expansion (especially at common and uncommon), so I would definitely recommend taking this guy for your deck. Flying is the best type of evasion, and with 3 power you’re not going to find anything better in white unless it’s an Angel. Even then, you’re going to be playing them a lot later in the game. Solid 6-7th pick in draft, and a must in sealed as well. He’ll be able to easily chip away at your opponent’s life total and trades with a lot of creatures as well. The big drawback is his 1 toughness though. He might have a problem against red due to its removal.

Even though Duantless River Marshal requires you to play in blue, I think he’s totally worth it. We’re looking at a 3/2 creature in UW (already pretty awesome) that gives you the added bonus of tapping down a creature. It would be hard to pick him highly in that first pack of cards in draft, but if you’re leaning towards UW and get him in one of your next two packs, I would definitely take him first at that point. With Evolving Wilds at common in M15, it’s a definite possibility to play him on turn 2 then get your island on turn 3 after attacking to pump him up. Good card, but as I said he’s not worth drafting highly unless you’re playing blue and white.

I was rather impressed with Oppressive Rays in Theros limited, but that was mostly because it made activating a Monstrous effect really hard. However, I still think it’s a good semi-pacifism card that can quickly shut down an opponent to let you get some damage in. I think it has a good spot in a W/x aggro deck or sorts. Not high for draft, but I wouldn’t let it get past you twice. Maybe a 7th+ pick in booster draft.

I have a lot more “maybes” this time compared to previous sets, but that’s not necessarily a bad thing. The ones I talked about in depth I think are a little bit stronger in a vacuum, while the ones that might see play have great synergy and can be really good if you get the cards you need in your packs. From looking at white only, I can guess that UW flyers is going to be one of the archetypes, so consider putting that together at the pre-release or during draft if you have the cards. It should be decent, though I don’t know how strong it would be just yet. I’d probably add in power buffing abilities like enchantments to keep the pressure on my opponent, and having good blockers on the ground might not be bad either. W/R aggro might also be possible, and it might not be a bad idea to look into WG too.

So what do you think of the M15 limited format so far? Any suggestions? Any cards that I missed that you think should be up here? If so, please leave a comment below and I’ll consider adding it to my article. Next time we’ll be covering blue. I’m going to try and get it out by Monday night, but if not you can expect it on Tuesday sometime. Thanks for reading and see you again soon!