It’s the beginning of July and there has been a steady stream of spoilers coming from Wizards for the newest core set, M15. Looking back at M14, there were quite a few good support cards, but nothing that really changed the game. Slivers were fun to play with for the first few weeks before people realized how susceptible they were to board wipes and removal, mythic rares such as Garruk, Caller of Beasts and Archangel of Thune were big parts of the metagame for a while, but others such as Kalonian Hydra and Primeval Bounty were relegated to niche decks and never really took off. By far the best cards of the set were Mutavault and Scavenging Ooze, which really helped to power up devotion decks or in Scavenging Ooze’s case, ended up becoming a popular substitute for Deathrite Shaman in modern after it was banned.

You’re probably the same as me, looking through the spoilers and trying to come up with ideas for the next shift in the metagame. The Pain Lands have been spoiled, which means we can expect both scry lands and pain lands in the same block for mana fixing. It’s my belief that this will push the price of a card like Courser of Kruphix even higher as players look for ways to turn pain lands’ disadvantage into something more neutral. But what about the other cards that we know about? In today’s article, I’d like to search for the next breakout card and touch on what I think will have the biggest affect on your 60 cards by the end of the month.

The first card I’d like to talk about is Preeminent Captain. A 2/2 first striker for 3 mana is alright, especially in limited, but slapping on a Knight of Bladehold type effect to put a creature into play when attacking is pretty big in the standard environment. We’re talking about getting crazy with Brimaz, King of Oresekos, Precinct Captain. Lavinia of the Tenth, Loxodon Smiter . . . the list goes on and on. Even a card like Tajic, Blade of the Legion might see some play because it curves into this card well, and if you’ve been wanting more ways to activate Battalion triggers, there is no better card thank Preeminent Captain.

The next card I’d like to talk about is Perilous Vault.

Many players are comparing this to Oblivion Stone, which destroys all nonland permanents without a fate counter on it, but this effect is much better. Good bye all indestructible cards. Perilous Vault also has the bonus of being colorless, which means it will fit into just about any deck. The big problem with non-blue/white control decks these last few months was the lack of a quality sweeper effect. Grixis (BRU), BUG, and Junk (GBW) all have some great cards in their colors, but sometimes they just lose by turn 4 or 5 because they can’t deal with the onslaught of creatures from an opponent. This will get rid of Domri Rades and Xenagos the Reveler in Jund and GR, this will get rid of Detention Sphere and Elspeth, Sun’s Champion in control decks, and just about anything else you can think of. If you want to play a midrange or control type deck that has a powerful late game, Perilous Vault is definitely going to be in your deck either as a sideboard or mainboard card. It also works great with Aetherling.

Non- UW control decks, slow rolling midrange decks, perhaps reanimator as a boardwipe before playing Whip of Erebos to reanimate the cards in their graveyard

Nissa is next on my list of extremely powerful cards from the Core Set, and she has the potential to really power up green midrange decks. For starters, she protects herself by making a 4/4 blocker out of ANY land. Her second +1 ability on the other hand, untaps four forests after you cast her for 5. This might not be great in a 3 color deck using Scry and Pain lands, but in a mono color or 2-color deck we’re looking at the ability to cast a Poulkranos, World Eater, Desecration Demon (if you’re playing GB with Overgrown Tombs), and a large number of other powerful creatures that cost 4. Yes, you’ll have problems if your opponent starts to Doom Blade or Hero’s Downfall your mana sources, but this ability can very quickly put an opponent in a bad position. She reminds me of green Koth the Hammer, but with a better upside. She’ll be a 2 or 3 of in most green decks I think.

Look for her in:

Chord of Calling made some big waves when it was announced to be appearing in M15. This card is a huge player in modern Birthing Pod decks due to the synergy it has with the strategy of the deck. It pulls a creature out of your deck at instant speed, then you use Birthing Pod to search your library for another, more powerful creature. Sure, we won’t have any infinite combos that allow Chord of Calling to be bonkers with Birthing Pod in modern, but it should be strong in standard nonetheless. Have you ever drawn all your mana creatures in a ramp deck and then had no way of finishing the game? Sure, you can make 10 mana on turn 5, but what can you use it for? This is where Chord’s ability comes in. You tap those creatures for mana, along with any others you have that don’t make mana, and you get your biggest, baddest threat AT INSTANT speed. This card will definitely change the metagame I think. No more worrying about Advent of the Wurm, there will be bigger fish to fry. 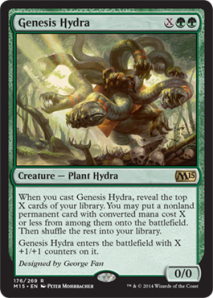 Genesis Hydra is just down right hilarious. It’s Genesis Wave on a stick. When you play it you get to look at X cards and put an X or less casting cost permanent into play. At the beginning of Theros standard, Makito Mihara championed a Colossal Gruul deck using Nykthos, Shrine to Nyx and from there on out the Devotion archetype was born. The idea behind the deck is to make crazy amounts of mana insanely fast and to beat your opponent down with oppressive force. In red devotion, this usually means casting a Fanatic of Mogis with 10+ symbols on the board. But with green devotion, you could be playing a Garruk, Caller of Beasts for free, a Nissa, Worldwaker, and even in an Elspeth, Sun’s Champion if you are splashing for white. Playing 4 of these in any deck with either ramp or Nykthos is going to lead to some crazy board states. I definitely think he’ll see some play, though I don’t know if it will shift the metagame around.

Green/x ramp decks, G/x devotion decks (GR is a big contender thanks to Xenagos also helping you to make large amounts of mana)

This card seems like it will be broken eventually in standard, but one major draw back that this has to Birthing Pod from New Phyrexia is that it’s a creature and can be killed. This is especially true in a heavy black metagame. However, its benefits outweigh its drawbacks I think. Just like with previous standard Birthing Pod decks, we’ll see mana creatures in the deck to play him on turn 2, search for our first creature turn 3, and then afterwards he’ll keep getting bigger and better creatures. The problem is, he’ll be a lot slower than Birthing Pod, being only able to get creatures with the number of counters he has on him. You can also only use this ability once for each converted mana cost, which means you’ll have to slowly build your numbers to get good creatures. If you want to get around that, you might want to consider using Vorel of the Hull Clade to double those counters each turn.

It’s own deck. Probably a Green/x deck with mana creatures and some powerful one-of cards. GU would give you counterspells to protect him, but GW and GR would give you a lot better creature selection I think.

Others cards that will come out of the gate running

Here are a few other M15 cards that I think will be seen quite a bit in the new standard metagame in a few weeks:

Coming Up Next week

As crazy as it sounds, the pre-release is next weekend for M15. The full spoiler could possibly be out this Saturday at the earliest. The biggest cards seem to have been spoiled already, but there are always a few sleepers that get by everybody else. With all these cards, I should be buying a box, but this time I plan on using that money to buy singles I need and to draft the set like crazy. It gives me a better pick of cards and doesn’t mean I’m left with endless chaff rares that I can’t use. As always, I’ll be doing my “Play to your Weaknesses” articles to help you prepare for the M15 pre-release and limited environment, so be sure to check back in a few days for the first article! Thanks for reading today’s article, and if you have any suggestions or comments about what you’ve see spoiled so far in M15, please feel free to leave a message below.