Bang for your Buck: Investing in Cards for Dragon’s Maze – White

Week 2 of the Dragon’s Maze metagame is just about over. I’ve been brewing new decks and tweaking my RWB vampire deck for standard and I think I’ve finally found a good balance against a variety of decks. In Nagoya, the metagame has shifted towards faster decks. Bant flash, mono red, Bant hexproof, and a number of other fast aggro decks have been doing well, and cards like Blood Baron of Vizkopa, Voice of Resurgence, and Advent of the Wurm have been seeing a lot more play. There has also been a return to UWR decks as I predicted, but they have yet to make it into the ranks of the top decks such as Naya Blitz and Reanimator. How will the continued popularity of aggro decks affect prices in the coming months of white cards? That’s what I’ll be covering today.

I think I did a pretty good job with my suggestions for white cards last time, though it’s going to get a lot more difficult now due to the impending rotation of quite a few cards in September. The value of many of these cards is going to depend on how soon people wean themselves away from certain strategies and into new ones (and sell those rotating cards before it’s too late). As always, I’m going to try and guess which strategies will continue to stick around into the twilight of the Innistrad block, and which ones will fall by the wayside.

Seriously, who would have thought that Rhox Faithmender would have reached $4.50? I remember buying mine for about $0.50 a few weeks after M13 came out. That definitely seems like a peak in value though, so I wouldn’t buy any more right now. I’m also kind of surprised at how everybody forgot about  Sublime Angel ($10.50). There is one card right now that I think you should pay attention to. 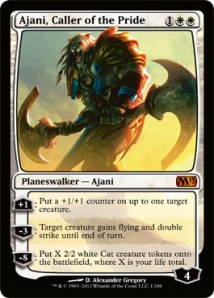 Ajani, Caller of the Pride

It’s been revealed that Ajani ($7.70) will be one of the planeswalkers returning for M14, so it’s possible that the Caller of the Pride will see some resurgence once it’s revealed as a reprint and we have a better view of what the metagame will be like post rotation. I’ve always thought of it as a pretty sweet planeswalker, and I do think he deserves another chance. Turn 2 Voice of Resurgence and Turn 3 Ajani seems like a good combo in my opinion (especially if you can give flying and double strike to it’s X/X token after it dies), and I think Ajani would also combo well in a deck with Gideon, Champion of Justice (add that counter to him when he’s a creature, or give him flying and double strike). Wait and see if he’s reprinted, but if you can find him around $7 or so I think he’s worth picking up. Even if he isn’t, I think he’ll fit into some brews during Dragon’s Maze.

There are two cards that stand out in Avacyn Restored that I think are undervalued right now. The first is Silverblade Paladin. He’s currently sitting at $5, and I think we haven’t seen the last of him in standard yet. Selesnya Aggro, humans, heck, even Bant aggro could benefit from him. There are still a lot of possibilities and decks that he’d fit into, and he brings a lot of power to the table. You can expect him to go up a few dollars again before fading away pre-rotation. I think he’s a strong buy at $5. Terminus ($4.40) is another undervalued card from AVR. Control WILL find it’s way back to the metagame, and when it does Terminus will be back in full force. This card shines against those decks that are packed with regenerating creatures, and it absolutely cripples midrange decks after they’ve put all their cards on the table (especially reanimator). Pick this card up now before it goes back up in price.

With Thalia, Guardian of Thraben at $3.80 I’d like to say she’s at a good price, but at this late in the game (with only 4 months left to use her), I don’t think she makes as big of an impact against the number of decks she did before. I’d hold off buying her at this price, but if she hits $3 I think she’d be worth buying 4 of, if anything to give your aggro decks an edge against control decks if and when they return. There aren’t many cards from Innistrad that I’d risk my money with, but if I wanted to put my money on anything I think it’d be Mikaeus, the Lunarch. M14 looks like it will a lot of cards that give counters, and he might fit into some of those strategies. I kind of like him now, but haven’t brewed with him too much.

I’d like to say that Gideon, Champion of Justice ($6.30) will see an increase in value during Dragon’s Maze, but I really doubt it. I do think that Blind Obedience ($3.20) will hold it’s value though, especially against aggro in the sideboard of control decks. In RTR, Rest in Peace will continue to hold its value at $2 or so (maybe even see an increase), as will Angel of Serenity at $14 or so. It’s s strong card that will continue to see play in midrange decks as well as reanimator, and I don’t expect it to drop off too much when reanimator reaches its final days either.

Other than these, I don’t see any other cards making a huge splash in standard, but we should always leave room for the wildcard. There is bound to be a new archetype lurking in the shadows somewhere, waiting to be let out. When it does, cards we wouldn’t expect will shoot to prominence and raise in value like Angel of Glory’s Rise did with Human reanimator. Which of these sleepers will awaken in the coming weeks? Who knows.

The door is wide open for the next installment. We have Black, Green, and Red left to cover before I wrap these articles up with multicolor and hybrid cards. If you have any thoughts or comments or thoughts about today’s cards, I’d like to hear them. Please be sure to leave some feedback down below if you want. As always, thanks for reading and I hope to see you back in a few days when I post my next installment.