Theros: Playing to your Weaknesses – Red

I always tend to cut these things close, so I’ll try to keep my comments to myself until the end. Red is up next, so let’s take a look at what the color of rage and passion has for us.

The first card today is an aggressive 2 drop that can be a pain in the butt for your opponent if you’re playing red and black. It’s good for putting pressure on the other player, but as you can see from the spoiler list, this card will be outclassed in a few turns. If you want to keep it alive, throw some enchantments on it, otherwise you can expect it to get in for a few points of damage before dying. I’d put it in my deck as an early attacker if your opponent is playing slowly, but against decks where it’s outclassed I’d take it out. Not a high pick, but I think it would be a good card to have to test the waters. He could suck up a removal spell, and if you can sneak in a few points of damage he’ll be worth it. 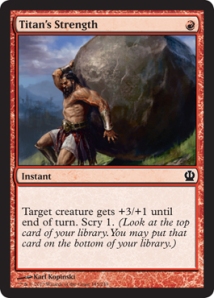 I see this as a Giant Growth for red with the bonus of being able to scry one card. Great combat trick for red, and I also like it a lot in a Heroic themed deck. I don’t think I’d have it high in my sealed deck, but if I needed to round out my 23 card choices, I think this might be good in that last spot. Adding 3 damage to an unblocked 1/1 is the same thing as hitting something with a Searing Spear or other burn spell. The scry should help you keep pressure on your opponent too. 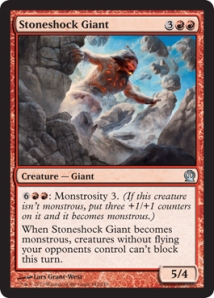 I like red A LOT more than I like black or blue, at least for creatures. On the surface it’s a fire elemental (5/4 for 5), but adding in an 8 mana monstrous ability is just hilarious. This card is a great finisher in a red deck, so I recommend taking him rather early in draft. Unless you’re playing against blue or white, his second ability might as well say “creatures are unblockable this turn”. The number of flyers is a lot lower than M14, which will make him really hard to block. I’d also recommend using him in your sealed deck as well. He should win you a few games barring any removal spells before he becomes monstrous. 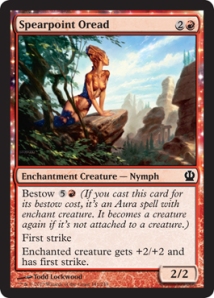 First strike on a 2/2 body is fine, and I think I’d probably play her in that mode more often than waiting for bestow her for 6. Playing her later on in the game when you have the mana to bestow her is fine, but otherwise play her right away for board presence. There’s no need to hang on to her until you get 6 mana. Probably a 8th-9th pick in draft, and a top 15 choice for a sealed deck. 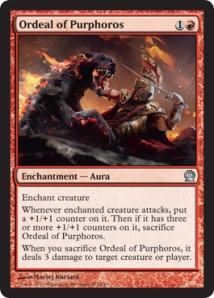 I love it. It’s like a delayed Searing Spear as well as a power boost. You can see the sizzling tip glowing and arching your way in the sky, and then finally 3 turns later it lands and hits you or your creature for 3 damage. I’d take this very early in a draft, and it would definitely be in my sealed deck. It’s very rare that we get a power boost as well as removal in one card. Out of all of the Ordeals, this is my favorite one by far. It’s also looking like it will be a great card in standard as well.

We lose Searing Spear and Pillar of Flame, but in their place we get Magma Jet. It’s not really a step down, more like a step sideways. The scry is very useful in a red deck where drawing the right card is incredibly important. I think having Magma Jet will be very similar to using a card like Ponder in blue. It will smooth out your draws and make red a lot more dangerous. In limited it can serve a similar purpose. The ability allows you to play a lot more aggressively, so if you see a deck with a lot of scry, be careful. The 2 mana, and 2 damage isn’t too powerful in this format, but I still think it’s good to have in your deck. Hold onto it to deal the last points of damage to a creature, or to get your opponent’s life within range. In limited, I think it’s scry will be the most useful to you. Play with it in sealed, but realize its limitations in draft, especially if there are better options out there.

Here’s our new Searing Spear! I don’t know why they didn’t keep the old name and everything. Seems wasteful. Anyways, this is the removal you want to be picking up for red in a draft. Three damage should still hit a lot of creatures, and it does a size-able amount of damage a player as well. It’s pretty obvious you want this in both draft and sealed, so get it in your deck! It would be one of the first 5 cards I’d add into both. 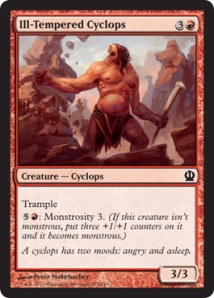 A 3/3 for 4 isn’t bad, but making it a 6/6 trample for 6 is even better. As far as monstrous abilities go, this guy is a little on the skinny side, but the trample makes him a lot more effective. I think this would be one of my first 5 choices in a draft if I was going with red, and it’s a top 10 choice for sealed too. For a common, the creature and his abilities are costed pretty aggressively.

Hopefully you get a few scry spells. If not, a 2/3 for 3 mana isn’t bad at all. Without scry to boost him, I think I’d still use him as one of the final cards to fill in my 23 slots, but his value increases if you can draft or put in a few scry cards from your pool. Blue and Red look like the best colors to use with him, but what card would be absolutely INSANE with him is the Witches’ Eye which scry often! 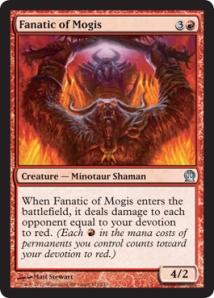 This card makes you want to play mono red. He could end the game if played late enough. I think the Fanatic will excel in booster draft where you can put together a deck to your liking. There will be a few people playing mono red because of this card(+splash another color). I think this is also a good card to have in sealed. 2 colors won’t be the best, but I think you could still treat him as 3 mana for 8+ damage to an opponent.

This is an interesting take on the original Firebreathing from the early sets. Give your creature +1 for X red, and draw a card! This card is pretty useful, and I think I’d use this in my deck for both the cantrip and the boost in power. Yes to both draft and sealed, but not too high. Top 20 pick though.

Red has some good spells, and some decent creatures. It’s possible for it to be the main color of your attack. It seems to have a good balance of speed with an number of creature with haste, power (due to monstrous), as well as utility (scry). I’d rank it higher than Red, but probably on par with blue. I’m almost done, but I don’t know if I’ll have much time to put out green before the midnight pre-release tomorrow night. As soon as finish work I’ll try to put out green, but if not, please look for it sometime on Saturday morning. Thanks for reading!

3 thoughts on “Theros: Playing to your Weaknesses – Red”