In my last article about day 1 of the Grand Prix I talked about how I washed out at 4-5 on the day but had a great time with my friends, especially cheering on those that went 9-0 on day 1. Today’s post starts with the 2nd day of Grand Prix Nagoya.

The previous day I had woken up at 7:30 am to meet up with my friends and help them find Fukiage Hall where the GP was taking place. Was I going to go back again early on Sunday to watch all the action unfold? Hellll no. I slept in and woke up at a decent time, then met up with my friend Matt around 9:30 am. He had brought a stack of cards with him from Redcastlegames.com and we were gonna put them up for sale at Mishimaya, up near Ozone station. We took a good hour to an hour and half to put everything up for sale that we wanted to, and when we were done Matt took a look at some cards that he thought were a great deal. Most noticeably, MPS lands. 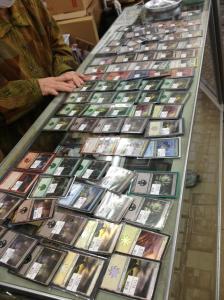 For those of you that don’t know, MPS lands are a Japan only promo land card, and they sell for a premium overseas. Some foils have been known to sell for upwards of $5 a piece in the USA! We stumbled across a treasure trove of them going for 53 yen each, and Matt snatched them up. After that we grabbed some lunch then headed off to the GP. 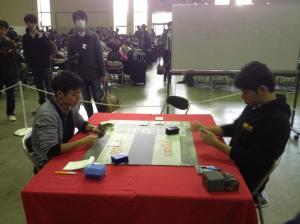 By the time we arrived around 12:30 pm, the 3rd round of the day was winding down. I was disappointed to hear that my friend Suzuki-san, who went 9-0 on Day 1, had dropped 3 in a row due to land problems to go to 9-3. He ended making the top 128, but lost once more to finish at 11-4 for the GP. Still a great result! In the picture Above, you can see Yoshimura-san, who I sometimes play against, taking on Yuuya Watanabe. He stole one game from him, but I wasn’t sure if he won the match or not. It was still a site to see all of these Japanese titans of Magic playing in one room. 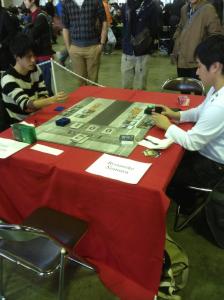 For the rest of the day I hovered around the “Featured Match” tables and watched my friends play. I did take some time out to trade during day 2, and got some cards that I needed. I was kind of ashamed of the cards that I had brought (which weren’t much). People had some amazing binders full of great cards, but I was stuck peddling my junk in hopes that somebody would need a card I had. I’m starting to think that maybe I should buy 2 boxes when a new set comes out to get the cards I need. In the picture above, Ryosuke Nomura battles Kenji Tsumura (one of the top players in Japan) and did pretty well for himself. He ended up 11-3-1 for 23rd place out of 1869 people with his GWB reanimator deck. 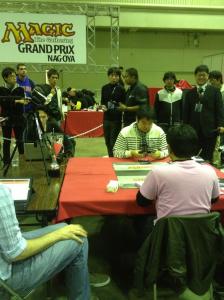 My last picture from the event was from the finals between Yuuji Okita and  Rahman Aryabhima. Rahman was very close to the top and would have joined a select few foreigners who have won in Japan. Only 3 other people, including legend Jon Finkel have ever accomplished this feat. Rahman was using BR zombies and couldn’t have been matched up worse against Okita’s Angel of Glory’s Rise reanimator deck. There were some games that saw Rahman getting in some quick damage to put Okita into single digits, but once Yuuji resolved the angel, it was all over. I’m sure you can find video of it online somewhere if you’re interested in seeing the match up.

I wouldn’t go so far as to say that Okita’s victory shook the foundations of the standard meta game, but it infused it with some new blood, just as Nightshade Peddler/Izzet Staticaster did a few weeks before. There are about 6 weeks until the pre-release of Gatecrash, and the standard metagame still seems healthy. There are a variety of decks out there capable of winning major events so don’t give up if what you’ve been using hasn’t been doing well. Do some research and find something that fits your play style, I’m sure there are plenty of choices out there.

If you want to hear more about what I thought about the Grand Prix, please head on over to 60cards.com and check out my article In the Embers of Rakdos.

With my first Grand Prix in the books, I’m looking forward to the future and pressing onwards. I’ll be working to discipline myself to make less and less mistakes and to read the metagame better. In March, Yokohama will be hosting a Gatecrash sealed/booster Grand Prix that I’m thinking of joining, and in August Kitakyushu in southern Japan will be hosting another standard Grand Prix. That gives me 8 months to work on my decks and to strive to become a better player. You’re never going to have all of the best cards, but if you work hard, discipline yourself, and keep at it, you can do very well at events.

I wish you all the best of luck in your next event, and hope to see you back here in a few days for more content from The Japan Hobbyist! Thanks for reading.

← In the Embers of Rakdos . . .
Chinks in the Armor: Figuring out the current Metagame →