Amonkhet: Playing To Your Weaknesses – Red

Just when I think one color is the best, I take a look at one I haven’t evaluated yet and it blows me away. The synergy that red adds to the other colors such as green and black are above and beyond what I expected. Red brings speed and power, and if you underestimated you WILL get burned.

Where do I even start with red? Well, here we have a creature that isn’t over costed at 5 mana for a 4/4, but what makes it so powerful in this limited format is the ability to continuously punish your opponents. If your opponents don’t have enough creatures to block with this card will simply end them. This card turns your entire deck into a deadly cobra, waiting for the right opening to inflict maximum damage. Any type of evasion such as trample or flying can turn into a massive swath of pain. Take a good look at that second ability. Whenever ANY creature exerts itself, all of your creatures get +1/+0. Attack with 3 exert creatures and stack their triggers to give ALL your creatures +3/+0. Your opponent won’t know what hit them. As Ken, the Fist of the Northstar says, “you’re already dead“.

I’ve already covered a few exert creatures in white and black, but red probably has the best ones. Ahn-Crop Crasher is a battering ram that runs head first into opponents. He attacks the turn he comes into play, and if your opponent isn’t careful they will leave themselves totally wide open for your entire time to reduce their life total to ashes. Even if you’re playing it on turn 3 you’re getting the advantage. Combo’ing this up with the “bash brothers” (Trueheart Twins) isn’t even fair.

As you can see, there are plenty of other choices in red that you can exert alongside the Trueheart Twins. Battlefield Scavenger does double duty as a discard outlet to help you pump up various effects like Horror of the Broken Land’s as well as creating an Exert trigger, and Nef-Crop Entangler becomes a respectable beater when you Exert him. Both are easy to play and fit well early on your curve. The Emberhorn Minotaur is where you start getting into some real damage. Without exerting himself he’s going to do decent damage, but on an open board he can be pretty dangerous as a 5/4. It’s great alongside cards like Ahn-Crop Crasher which can leave your opponent with only one blocking creature so the minotaur can push through 5 menace damage. They’re all decent picks in draft, but I think I’d take Emberhorn Minotaur higher than the others. 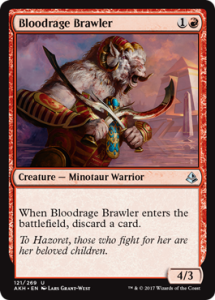 Our next batch of cards work well with quite a few cards that such as Flameblade Adept or Ruthless Sniper. Do you think discarding a card isn’t worth a 4/3 beater on turn 2? This card is insane, especially if you’re flooding out on land. I’d be more than happy to get rid of a card for Bloodrage Brawler. Seems great in a BR discard/cycle aggro deck, but really you can play it in any red deck you want. I think it will go pretty quickly in draft and if you see it passed to you, it’s obvious what colors your opponents aren’t playing.

Deem Worthy feels like a card that should have been printed a long time ago. We’ve had cards like Burn Away that does 6 damage at instant speed, and other effects that deal a lot of damage for an exorbitant amounts of mana, but Deem Worthy puts them all to shame 7 damage at instant speed is one of the highest amount of damage I’ve ever seen on a red card, and that in and of itself would make me play it, but being able to turn it into a 2 damage shock that draws you a card and has synergy with a wide range of effects makes it even better for me. Yeah, it only deals damage to creatures but that’s fine in limited. Should kill just about anything.

Desert Cerodon is just a big dumb beater with subpar defensive stats, but it has one thing that most other finishers don’t have: Cycling. Good top end card for decks playing around with discard effects. I’m not sure it will always make the cut in your deck, but it should find its way into that 22nd or 23rd slot most of the time. 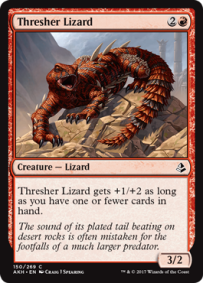 With looting and cycling effects at your disposal in both red, black, and blue you should have no problem cutting away at your opponent with Flameblade Adept’s ability. If you can keep your hand full with cards that have cycling or protect your looter creatures, you can expect the Adept to become a dependable source of damage. Cycle/discard as a combat trick to take out two creatures thath block it, or just pump it up to 2 or 3 power every few turns to put pressure on the other player.

Thresher Lizard is a neat card that works parallel to the Adept. While the Jackal Warrior gets pumped up, Thresher Lizard also gets closer and closer to being dangerous. Late game when you’re holding on to just one piece of removal or some cycling effects, Thresher Lizard can become a real hassle that has to be dealt with as a 4/4.

Warfire Javelineer is a bit trickier to evaluate. It all depends on how many sorceries and instants you’re playing in your deck. Sometimes you might be playing 7, sometimes 4, it really depends on you build. I can be situational, because most of the time you might only have 2-3 instants or sorceries in your graveyard when you cast it. Late game it can be really powerful, doing 4+ damage to your opponent’s creatures, but be aware that othertimes it can be a pitiful 2/3 4 drop that only does 1-2 damage. I’d draft it high if I was building a deck to take advantage of Enigma Drake, but otherwise you’re probably okay letting it table once in favor of more consistent cards. Each of these cards above could be really good in the right deck.

Getting into the removal, my favorite has to be Fling. I love having this card in my hand when my opponent goes to take out my finisher with their removal. Getting rid of their spell and dealing a nice chunk of damage to their life total is very satisfying. Great card to have if you’re playing glass cannons with high powers, or if you have pump spells that can add more insult to injury.  I’d take this high in draft.

Boy oh boy am I glad to see Magma Spray back. Besides being an awesome card to have in standard against zombies and Scrapheap Scrounger, Magma Spray can go a long way at disrupting your opponent’s plan to have a long game with their embalm creatures. Exiling their Angel of Sanctions after blocking is going to be so evil, but feel oh so good. I expect it to be a popular piece of removal, but I’m not sure if it will be a high pick in draft.

Electrify isn’t one of the most efficient damage spells at 4 mana, but it is an instant and will fry a large number of creatures in this format. This is a bread and butter card that you will find lots of uses for, but at the same time you’ll feel regret when you can’t use it to deal damage to a player to finish them off. Solid removal, should be a somewhat high draft pick.

A reusable burn spell? Nice! Unlike Electrify and Deem Worthy, Trial of Zeal gives you the chance to hit an opponent, and if you have a Cartouche or two, it can do it multiple times. If your pool sucks with removal and you need to get creative, put this and Trial of Ambition in the same deck and load up on Cartouches. They should get the job done, albeit somewhat less consistently than a plane old piece of removal.

My final card is this cute little kitty-like creature: Manticore of the Gauntlet. Besides being a beefy beater that can deal some real damage to an opponent, this part cat, part scorpion, part something else also gives you a little bit of that -1/-1 counter synergy that you could use on a Channler Initiate or Soulstinger to maximize their abilities. It’s too bad you can’t redirect that damage to a creature as well, but I guess that would be too powerful for a common. Its cost performance is still rather high though! I’d definitely play one in my red deck.

I’m pretty excited about playing red. If you build your decks well, you’ll be nigh unstoppable. There are so many interesting interactions, synergies, and layers to the color. You can play a BR cycling deck that gets stronger the more you discard, a R/x exert deck that goes wide and hits hard, a UR instant/sorcery deck that takes advantage of how many spells you have, heck even a BR -1/-1 counter deck that finds strength in weakness . . . the possibilties are there. I’m really looking forward to making limited decks with it.

Sadly, it seems like I won’t have my green evaluations done until Saturday night at the earliest. Hopefully these first 4 colors will give you an idea about some of the possibilities Amonkhet offers. If you’re interested in seeing how I do during the pre-release weekend and what I open, feel free to follow me on twitter @yoschwenky! To all of you playing in the pre-release, good luck!

One thought on “Amonkhet: Playing To Your Weaknesses – Red”